In a way, Workbench is just another program - but as the default interface on the Amiga, it's one program that many users will pass through on their way to your application. Although it has other facets and functions, it's the interface between your program and Workbench that is of concern in this chapter. 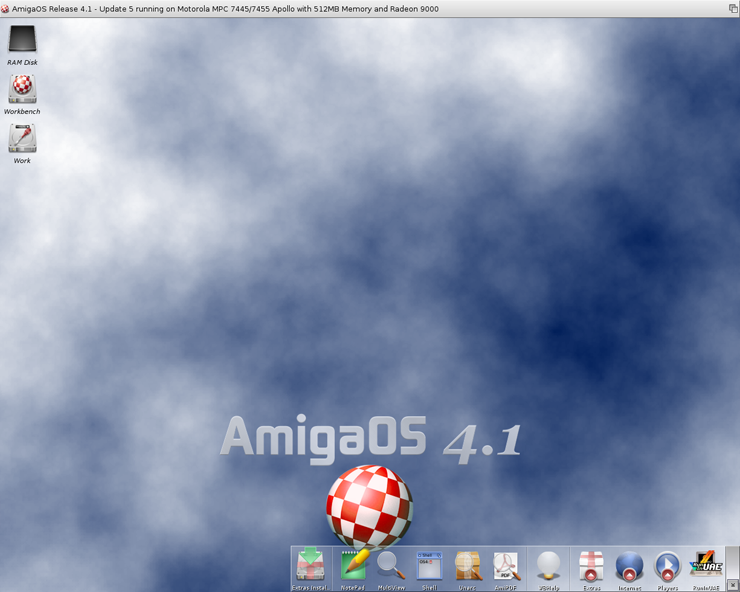 Icons are an important part of AmigaOS. Users like beautiful icons that describe a program in a clear and memorable way. Icons are pictorial representations of devices, directories, files, applications, objects or actions. Your program should have icons for anything the user can access including the main program itself, documentation files and any tools that may accompany the program.

The icon imagery is found in a file bearing the suffix ".info". For example, the icon for a data file called "myletter" would be found, along with some other information, in the file "myletter.info".

A good icon quickly communicates the function it represents. The Workbench offers a photo-illustrative icon style - it approaches the realism of photography but uses the features of illustrations to convey a lot of information in a small space. An illustration provides much more flexibility for conveying a concept in a very small space and it also gives you necessary control over details, perspective, light and shadow, texture, and so on.

The Calculator icon and the NotePad icon are good examples. 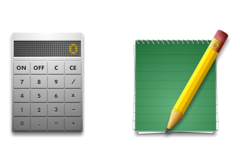 The Calculator and NotePad icons

The AmigaOS is the only operating system that use two different images to display the state of the icon (normal and selected state) The selected image features a glow effect, which makes them easier to recognize. Both pictures are combined to an icon for a simple but most realistic looking animation.

The maximum size for an icon is 256 pixels wide by 256 pixels high. The icons will be scaled down to the desired size as adjusted in the Workbench Preferences. 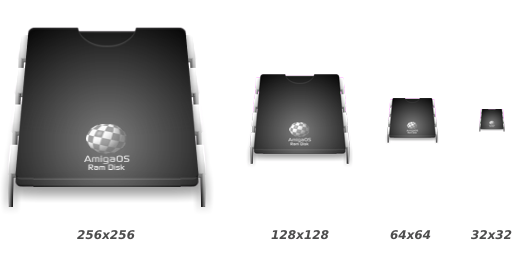 The painting area of an icon is defied in three virtual sections:

The angles and shadows used for depicting various kinds of icons are intended to reflect how the objects would appear in reality. All icon elements have a common light source from in front above. The various perspectives are achieved by changing the position of an imaginary camera capturing the icon.

The AmigaOS style guide allows two general perspectives to display icons: icons look like they are placed on a workbench in front of you and icons that look like pined flat on the wall. 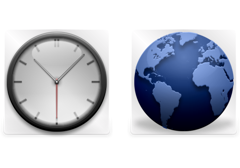 When the icon state is changed to select the light source will change extremely provide a glow effect. The colors of the icons will get darker (33 %) and a rich yellow shine will be added to the image to generate a great looking glow effect.

Color is a very important visual element of the AmigaOS icons as it has associated meanings and usually elicits emotional responses - to obtain it is very important to use color consistently.

AmigaOS icons use a basic harmonized RGB color palette and gradients based on these colors to generate a more realistic appearance. To achieve this goal, the colors need to work well together in many contexts. 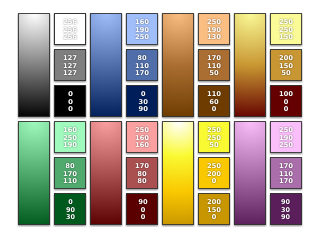 Icons for Preferences, Commodities and Dockies use buttons to separate them from other programs and make them easily distinguishable for the user.

Buttons for Preferences, Commodities and Dockies

Before you use words in an icon, think about how extensive a distribution you would like to see your product achieve. It's better to have an icon communicate through symbolism than language. Use global imagery that the user will easily recognize. Also avoid abstract or local symbolism and play on words. Keep your icons as simple as possible, fewer details might make your icons easier to distinguish in scaled down versions. Use the right perspective and colors for your icon. Avoid using the Boing Ball logo – the user usually knows on which system he is working.

There are five types of icons on the Workbench: disk icons, drawer icons, trashcan icons, tool icons and project icons.

A disk icon represents a device for data storage. A double-click on a disk icon shows the content of the device in a filer

A drawer icon represents a directory of a device for data storage. A double-click on a drawer icon shows the content of the directory in a filer.

A trashcan icon represents a temporary storage for files that have been deleted. A double-click on a trashcan icon shows the deleted files in a filer.

A project icon represents a data file. Typically, a double-click on this icon will cause the application that created the data to run and automatically load this data.

The look of a project icon is usually determined by the application that created it and by the type of data it represents. However there is also a default project icon included in the system.

An icon family is a set of icons that use the same symbolism that makes is easier for the user to identify files that are associated with a program. An icon family usually consists of an icon for the drawer and the program itself, but additional icons for project, preferences, tools or even drives might be a good idea.

Example of an icon family: tool, drawer and project icon of AmiFIG

When your application creates a data file, it should, by default, create a .info file to go with it. Many users are accustomed to accessing their projects via an icon.

Create the icon after the user successfully saves the project. This will prevent the possibility of project-less icons in the system.

Your application, however, should allow the user the option of saving files without creating icons. The recommended way of doing this is to have an item in the Settings menu called Create Icons?. This item should be enabled by default. See UI Style Guide Menus for more information.

New project icons should never be saved in a specific position. Rather they should be positioned algorithmically by Workbench (see the Workbench flag NO_ICON_POSITION). In the same vein, if the imagery of an existing icon is changed (e.g. the application creates a reduced version of the project for use as the icon imagery) the icon should be saved without a specific position.

To make the common operation of starting up programs more powerful, the Amiga provides ways of passing along more specific information to the application. This process of providing additional information to a program that's about to run is known as argument passing.

When using the Shell, the system is straightforward. The user runs an application by typing its name along with additional information such as the name of a file to operate on and any command options. The entire command line is then passed to the program as an argument.

The Workbench also provides means of passing arguments - but it is tied to icons instead of lines of type.

Applications started from Workbench receive startup information from the system in the form of a WBStartup message. The WBStartup message can be used to get various Workbench arguments including those found in the Tool Types and Default Tool fields of the icon the user clicked on.

If you click once on any tool icon and choose "Information..." from the Workbench's Icon menu, you should see a requester with a field for Tool Types. 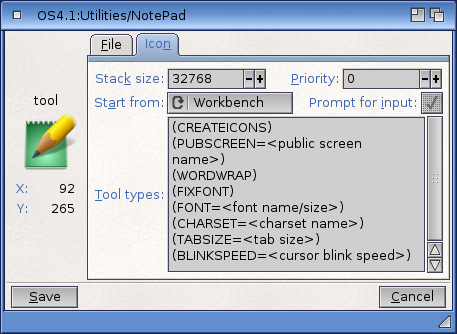 The Information requester for a tool icon

Arguments placed in this field take the form KEYWORD=value. KEYWORD is an argument name specified by your application, and value is a number or string that should be assigned to that argument.

For instance, the Tool Types field of a text display program might be set to LINES=20 to indicate how many lines to display at once.

Normally, the Tool Types information is filled in when the .info file is created; subsequent operations only read this information.

An Information requester for a project icon

Other facilities also exist in Workbench that allow an application to get more information while the application is already running. These are known as AppWindow, AppIcon and AppMenu.

For example, a text editor's windows may function as AppWindows. A user would be able to drag the icon of a file into the window and that file would be loaded automatically.

AppWindows, AppIcons and AppMenus are aimed at the user. By using techniques that are totally graphic-oriented (Tool Types arguments still eventually come down to a line of type), the Apps bring the power of argument passing more into line with the "point-and-click" metaphor.

An AppWindow is a special kind of Workbench window that allows the user to drag icons into it. It's basically a graphical alternative to a file requester.

Applications that set up an AppWindow will receive a message from Workbench whenever the user moves an icon into that AppWindow. The message contains the name of the file or directory that the icon represents.

For instance, Workbench's IconEdit is an AppWindow with three different areas which users can drag icons into - each with a different purpose. When the user drags an icon into the large box, the icon is loaded as a project. When an icon is dragged into the box labelled "Normal", its image is used for the normal (not selected) image. Likewise for an icon that is dragged into the box labelled "Selected" - its image becomes the activated image for the icon. 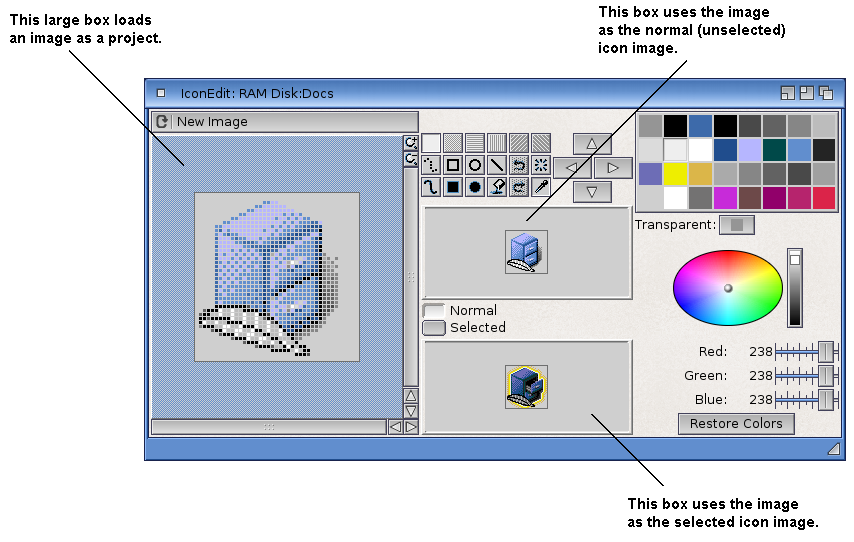 An AppWindow will often use icon drop box gadgets to indicate the active area where the user may drop an icon. Note: IconEdit did not follow this convention because it was more important to indicate the function of each area by its imagery (e.g. the "normal" area can be clicked on, etc.).

The window should activate when an icon is dragged into it.

An AppIcon is similar an AppWindow - it allows the user to pass a graphical argument to a running application. The only difference is that AppWindows use a window to accept the argument and AppIcons use an icon.

The image for an AppIcon should give some indication what operations it supports; ie. whether it represents an iconized application or supports dropped projects. Avoid vague imagery.

AppIcons are useful for programs that operate in the background with little other user interaction - a print spooler is a good example.

Double-clicking on an AppIcon should normally open a window offering information and controls. For example, a print spooler could open a status window in which the user could rename, abort or re-order the things he sent to be printed.

An AppMenu allows your application to add a custom menu item to the Tools menu on Workbench. An application that sets up an AppMenu item will receive a message from Workbench whenever the user picks that item from the Workbench menu.

Applications can also get arguments from Preferences. Via Preferences, the user can graphically set up the system defaults to suit his taste and needs.

Through Preferences, the user can control such things as screen fonts, colors and other global information that your application should respect.

You can create a preference editor to handle the defaults used by your application. See UI Style Guide Preferences for more information.