This memo is the IFF supplement for FORM FTXT. An FTXT is an IFF “data section” or “FORM type”—which can be an IFF file or a part of one—containing a stream of text plus optional formatting information.“EA IFF 85” is Electronic Arts’ standard for interchange format files. (See the IFF reference.)

An FTXT is an archival and interchange representation designed for three uses. The simplest use is for a “console device” or “glass teletype” (the minimal 2-D text layout means): a stream of “graphic” (“printable”) characters plus positioning characters “space” (“SP”) and line terminator (“LF”). This is not intended for cursor movements on a screen although it does not conflict with standard cursor-moving characters. The second use is text that has explicit formatting information (or “looks”) such as font family and size, typeface, etc. The third use is as the lowest layer of a structured document that also has “inherited” styles to implicitly control character looks. For that use, FORMs FTXT would be embedded within a future document FORM type. The beauty of FTXT is that these three uses are interchangeable, that is, a program written for one purpose can read and write the others’ files. So a word processor does not have to write a separate plain text file to communicate with other programs.

Text is stored in one or more “CHRS” chunks inside an FTXT. Each CHRS contains a stream of 8-bit text compatible with ISO and ANSI data interchange standards. FTXT uses just the central character set from the ISO/ANSI standards. (These two standards are henceforth called “ISO/ANSI” as in “see the ISO/ANSI reference”.)

Since it’s possible to extract just the text portions from future document FORM types, programs can exchange data without having to save both plain text and formatted text representations.

Section 2 defines the chunk types character stream “CHRS” and font specifier “FONS”. These are the "standard" chunks. Specialized chunks for private or future needs can be added later. Section 3 outlines an FTXT reader program that strips a document down to plain unformatted text. Appendix A is a code table for the 8-bit ISO/ANSI character set used here. Appendix B is an example FTXT shown as a box diagram. Appendix C is a racetrack diagram of the syntax of ISO/ANSI control sequences.

Amiga is a registered trademark of Amiga, Inc.

The main contents of a FORM FTXT is in its character stream “CHRS” chunks. Formatting property chunks may also appear. The only formatting property yet defined is “FONS”, a font specifier. A FORM FTXT with no CHRS represents an empty text stream. A FORM FTXT may contain nested IFF FORMs, LISTs, or CATs, although a “stripping” reader (see section 3) will ignore them.

FORM FTXT uses the core of the 8-bit character set defined by the ISO/ANSI standards cited at the start of this document. (See Appendix A for a character code table.) This character set is divided into two “graphic” groups plus two “control” groups. Eight of the control characters begin ISO/ANSI standard control sequences. (See “Control Sequences” below.) Most control sequences and control characters are reserved for future use and for compatibility with ISO/ANSI. Current reader programs should skip them.

Eight of the control characters begin ISO/ANSI standard “control sequences” (or “escape sequences”). These sequences are described below and diagramed in Appendix C.

FTXT uses “CSI-Seq” control sequences to store character formatting (font selection by number, type face, and text size) and perhaps layout information (position and rotation). “CSI-Seq” control sequences start with CSI (the “control sequence introducer”, hex 9B). Syntactically, the sequence includes zero or more characters in the range SP through “?” (hex 20 through hex 3F) and a concluding character in the range “@” through “~” (hex 40 through hex 7E). These sequences may be skipped by a minimal FTXT reader, i.e., one that ignores formatting information.

“DCS-Seq” is the control sequences starting with DCS (hex 90), OSC (hex 9D), PM (hex 9E), or APC (hex 9F), followed by zero or more characters each of which is in the range SP through “~” (hex 20 through hex 7E) or else a G1 character, and terminated by an ST (hex 9C). These sequences are reserved for future use and should be skipped by current FTXT reader programs.

A CHRS chunk contains a sequence of 8-bit characters abiding by the ISO/ANSI standards cited at the start of this document. This includes the character set and control sequences as described above and summarized in Appendix A and C.

A FORM FTXT may contain any number of CHRS chunks. Taken together, they represent a single stream of textual information. That is, the contents of CHRS chunks are effectively concatenated except that (1) each control sequence must be completely within a single CHRS chunk, and (2) any formatting property chunks appearing between two CHRS chunks affects the formatting of the latter chunk’s text. Any formatting settings set by control sequences inside a CHRS carry over to the next CHRS in the same FORM FTXT. All formatting properties stop at the end of the FORM since IFF specifies that adjacent FORMs are independent of each other (although not independent of any properties inherited from an enclosing LIST or FORM).

The optional property “FONS” holds a FontSpecifier as defined in the C declaration below. It assigns a font to a numbered “font register” so it can be referenced by number within subsequent CHRS chunks. (This function is not provided within the ISO and ANSI standards.) The font specifier gives both a name and a description for the font so the recipient program can do font substitution.

By default, CHRS text uses font 1 until it selects another font. A minimal text reader always uses font 1. If font 1 hasn’t been specified, the reader may use the local system font as font 1.

Fields are filed in the order shown. The UBYTE fields are byte-packed (2 per 16-bit word). The field pad1 is reserved for future standardization. Programs should store 0 there for now.

New optional property chunks may be defined in the future to store additional formatting information. They will be used to represent formatting not encoded in standard ISO/ANSI control sequences and for “inherited” formatting in structured documents. Text orientation might be one example.

Unless otherwise specified, position and size units used in FTXT formatting properties and control sequences are in decipoints (720 decipoints/inch). This is ANSI/ISO Positioning Unit Mode (PUM) 2. While a metric standard might be nice, decipoints allow the existing U.S.A. typographic units to be encoded easily, e.g., “12 points” is “120 decipoints”.

An FTXT reader program can read the text and ignore all formatting and structural information in a document FORM that uses FORMs FTXT for the leaf nodes. This amounts to stripping a document down to a stream of plain text. It would do this by skipping over all chunks except FTXT.CHRS (CHRS chunks found inside a FORM FTXT) and within the FTXT.CHRS chunks skipping all control characters and control sequences. (Appendix C diagrams this text scanner.) It may also read FTXT.FONS chunks to find a description for font 1.

This table corresponds to the ISO/DIS 6429.2 and ANSI X3.64-1979 8-bit character set standards. Only the core character set of those standards is used in FTXT.

Two G1 characters aren’t defined in the standards and are shown as dark gray entries in this table. Light gray shading denotes control characters. (DEL is a control character although it belongs to the graphic group G0.) 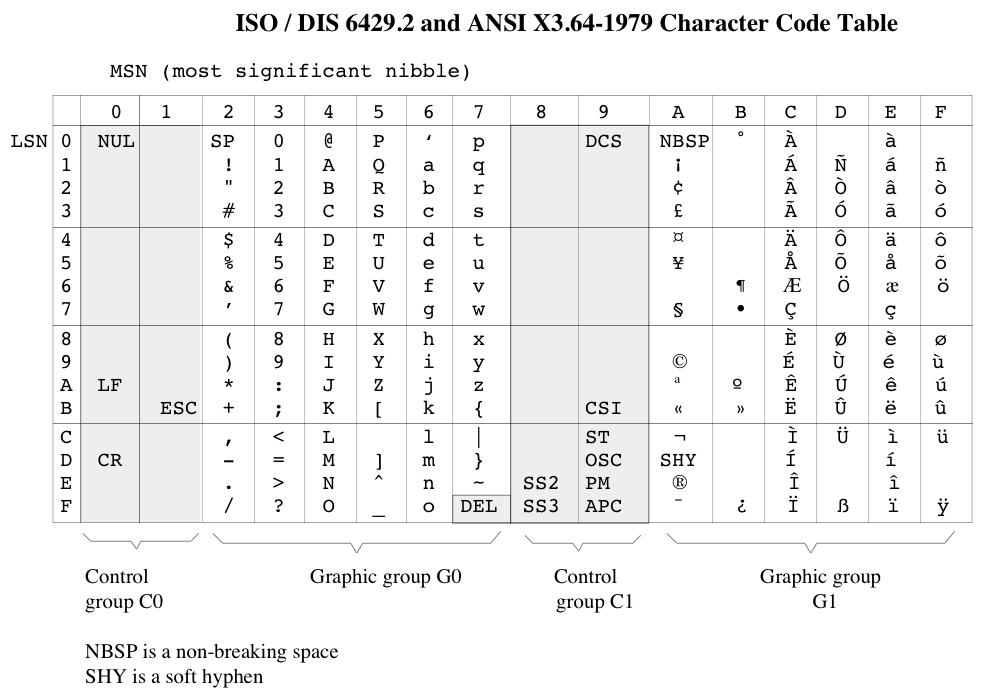 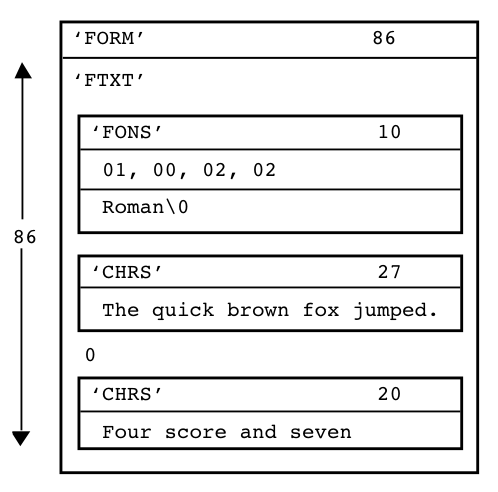 The “0” after the first CHRS chunk is a pad byte.

This is a racetrack diagram of the ISO/ANSI characters and control sequences as used in FTXT.CHRS chunks. 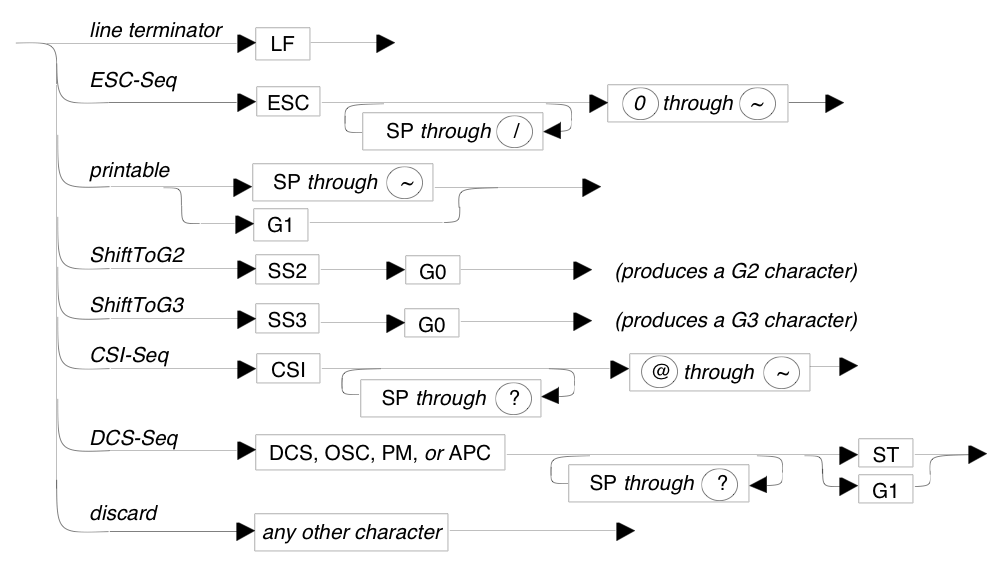 Of the various control sequences, only CSI-Seq is used for FTXT character formatting information. The others are reserved for future use and for compatibility with ISO/ANSI standards. Certain character sequences are syntactically malformed, e.g., CSI followed by a C0, C1, or G1 character. Writer programs should not generate reserved or malformed sequences and reader programs should skip them.

Consult the ISO/ANSI standards for the meaning of the CSI-Seq control sequences.

The two character set shifts SS2 and SS3 may be used when the graphic character groups G2 and G3 become standardized.