Exec manages the decoding, dispatching, and sharing of all system interrupts. This includes control of hardware interrupts, software interrupts, task-relative interrupts (see the discussion of exceptions in Exec Tasks), and interrupt disabling and enabling. In addition, Exec supports a more extended prioritization of interrupts than that provided in the CPU.

The proper operation of multitasking depends heavily on the consistent management of the interrupt system. Task activities are often driven by inter-system communication that is originated by various interrupts.

Sequence of Events During an Interrupt

You can see from the above discussion that the interrupt autovectors should never be altered by the user. If you wish to provide your own system interrupt handler, you must use the Exec SetIntVector() function. You should not change the contents of any autovector location.

Task multiplexing usually occurs as the result of an interrupt. When an interrupt has finished and the processor is about to return to user mode, Exec determines whether task-scheduling attention is required. If a task was signaled during interrupt processing, the task scheduler will be invoked. Because Exec uses preemptive task scheduling, it can be said that the interrupt subsystem is the heart of task multiplexing. If, for some reason, interrupts do not occur, a task might execute forever because it cannot be forced to relinquish the CPU. 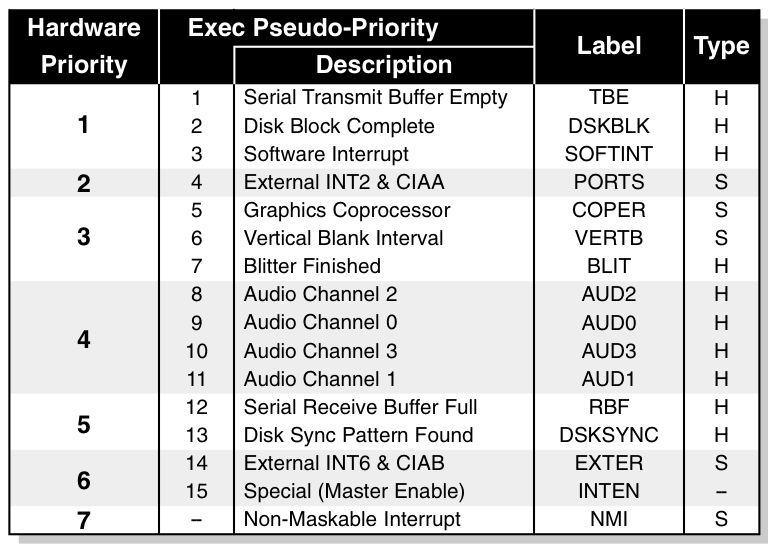 The 8520s (also called CIAs) are Amiga peripheral interface adapter chips that generate the INT2 and INT6 interrupts. For more information about them, see the Amiga Hardware Reference Manual.

Because it is dangerous on the Amiga to hold off interrupts for any period of time, higher-level interrupt code must perform its business and exit promptly. If it is necessary to perform a time-consuming operation as the result of a high-priority interrupt, the operation should be deferred either by posting a software interrupt or by signalling a task. In this way, interrupt response time is kept to a minimum. Software interrupts are described in a later section.

The 68000 provides a nonmaskable interrupt (NMI) of CPU priority 7. Although this interrupt cannot be generated by the Amiga hardware itself, it can be generated on the expansion bus by external hardware. Because this interrupt does not pass through the 4703 interrupt controller circuitry, it is capable of violating system code critical sections. In particular, it short-circuits the DISABLE mutual-exclusion mechanism. Code that uses NMI must not assume that it can access system data structures.

Interrupt handlers and servers are defined by the Exec Interrupt structure. This structure specifies an interrupt routine entry point and data pointer. The C definition of this structure is as follows:

Once this structure has been properly initialized, it can be used for either a handler or a server.

All interrupt processing code, both handlers and servers, is invoked as assembly code subroutines. Normal assembly code register conventions dictate that the D0, D1, A0 and A1 registers be free for scratch use. In the case of an interrupt handler, some of these registers also contain data that may be useful to the handler code. See the section on handlers below.

Because interrupt processing executes outside the context of most system activities, certain data structures will not be self-consistent and must be considered off limits for all practical purposes. This happens because certain system operations are not atomic in nature and might be interrupted only after executing part of an important instruction sequence. For example, memory allocation and deallocation routines do not disable interrupts. This results in the possibility of interrupting a memory-related routine. In such a case, a memory linked list may be inconsistent during and interrupt. Therefore, interrupt routines must not use any memory allocation or deallocation functions.

In addition, interrupts may not call any system function which might allocate memory, wait, manipulate unprotected lists, or modify ExecBase->ThisTask data (for example Forbid(), Permit(), and mathieee libraries). In practice, this means that very few system calls may be used within interrupt code. The following functions may generally be used safely within interrupts:

and if you are manipulating your own List structures while in an interrupt:

In addition, certain devices (notably the timer device) specifically allow limited use of SendIO() and BeginIO() within interrupts.

An interrupt handler is passed control as if it were a subroutine of Exec. Once the handler has finished its business, it must return to Exec by executing an RTS (return from subroutine) instruction rather than an RTE (return from exception) instruction. Interrupt handlers should be kept very short to minimize service-time overhead and thus minimize the possibilities of interrupt overruns. As described above, an interrupt handler has the normal scratch registers at its disposal. In addition, A5 and A6 are free for use. These registers are saved by Exec as part of the interrupt initiation cycle.

For the sake of efficiency, Exec passes certain register parameters to the handler (see the list below). These register values may be utilized to trim a few microseconds off the execution time of a handler. All of the following registers (D0/D1/A0/A1/A5/A6) may be used as scratch registers by an interrupt handler, and need not be restored prior to returning.

Here are the register conventions for interrupt handlers.

D1
Contains the 4703 INTENAR and INTREQR registers values AND'ed together. This results in an indication of which interrupts are enabled and active.

A0
Points to the base address of the Amiga custom chips. This information is useful for performing indexed instruction access to the chip registers.

A1
Points to the data area specified by the is_Data field of the Interrupt structure. Because this pointer is always fetched (regardless of whether you use it), it is to your advantage to make some use of it.

A5
Is used as a vector to your interrupt code.

A6
Points to the Exec library base (SysBase). You may use this register to call Exec functions or set it up as a base register to access your own library or device.

Interrupt handlers are established by passing the Exec function SetIntVector(), your initialized Interrupt structure, and the 4703 interrupt bit number of interest. The parameters for this function are as follows:

The following example demonstrates initialization and installation of an assembler interrupt handler. See the Resources for more information on allocating resources, and Serial Device for the more common method of serial communications.

The assembler interrupt handler code, RBFHandler, reads the complete word of serial input data from the serial hardware and then separates the character and flag bytes into separate buffers. When the buffers are full, the handler signals the main process causing main to print the character buffer contents, remove the handler, and exit.

As mentioned above, an interrupt server is one of possibly many system interrupt routines that are invoked as the result of a single 4703 interrupt. Interrupt servers provide an essential mechanism for interrupt sharing.

Interrupt servers must be used for PORTS, COPER, VERTB, EXTER, or NMI interrupts. For these interrupts, all servers are linked together in a chain. Every server in the chain will be called in turn as long as the previous server returned with the processor's Z (zero) flag set. If you determine that an interrupt was specifically for your server, you should return with the processor's Z flag cleared (non-zero condition) so that the remaining servers on the chain will be skipped.

The easiest way to set the condition code register is to do an immediate move to the D0 register as follows:

The same Exec Interrupt structure used for handlers is also used for servers. Also, like interrupt handlers, servers must terminate their code with an RTS instruction.

Interrupt servers are called in priority order. The priority of a server is specified in its is_Node.ln_Pri field. Higher-priority servers are called earlier than lower-priority servers. Adding and removing interrupt servers from a particular chain is accomplished with the Exec AddIntServer() and RemIntServer() functions. These functions require you to specify both the 4703 interrupt number and a properly initialized Interrupt structure.

Servers have different register values passed than handlers do. A server cannot count on the D0, D1, A0, or A6 registers containing any useful information. However, the highest priority system vertical blank server currently expects to receive a pointer to the custom chips A0. Therefore, if you install a vertical blank server at priority 10 or greater, you must place custom ($DF¬†F000) in A0 before exiting. Other than that, a server is free to use D0-D1 and A0-A1/A5-A6 as scratch.

A0
Scratch except in certain cases (see note above).

A1
Points to the data area specified by the is_Data field of the Interrupt structure. Because this pointer is always fetched (regardless of whether you use it), it is to your advantage to make some use of it (scratch).

A5
Points to your interrupt code (scratch).

In a server chain, the interrupt is cleared automatically by the system. Having a server clear its interrupt is not recommended and not necessary (clearing could cause the loss of an interrupt on PORTS or EXTER).

Here is an example of a program to install and remove a low-priority vertical blank interrupt server:

This is the assembler VertBServer installed by the C example:

Software interrupts can also be generated by message arrival at a PA_SOFTINT message port. The applications of this technique are limited since it is not permissible, with most devices, to send IO requests from within interrupt code. However, the timer.device does allow such interactions, so a self-perpetuating PA_SOFTINT timer port can provide an application with quite consistent timing under varying multitasking loads. The following example demonstrates use of a software interrupt and a PA_SOFTINT port. See the Exec Messages and Ports for more information about messages and ports.

As mentioned in Exec Tasks, it is sometimes necessary to disable interrupts when examining or modifying certain shared system data structures. However, for proper system operation, interrupts should never be disabled unless absolutely necessary, and never for more than 250 microseconds. Interrupt disabling is controlled with the Disable() and Enable() functions.

In some system code, there are nested disabled sections. Such code requires that interrupts be disabled with the first Disable() and not re-enabled until the last Enable(). The system Enable() and Disable() functions are designed to permit this sort of nesting.

Disable() increments a counter to track how many levels of disable have been issued. Only 126 levels of nesting are permitted. Enable() decrements the counter, and reenables interrupts when the last disable level has been exited.

Although this scheme allows unrelated pieces of software to easily share an interrupt, it can make the interrupt overhead rather high. These two interrupt server chains also handle interrupts from the CIA chips, which are used to trigger a variety of events. As a result, these server chains can contain a multitude of interrupt routines.

If your quick interrupt routine is 100% self-contained and does not access any operating system structures or routines, then the work is rather simple. Just save the registers you use, perform your interrupt processing, restore the registers, and end with an RTE. If, however, the routine needs to call the OS or use an OS structure, it must check if the interrupt has been delayed. This is necessary in case the interrupt hit the CPU just after the CPU had told the hardware to hold off interrupts (see the Autodoc for ObtainQuickVector() to find out how to perform this test).

ObtainQuickVector() returns 0 if there are no more vectors. Since the number of vectors is limited, any Zorro III device that uses quick interrupts must be able to fall back to the Amiga's conventional interrupt scheme.

The following chart gives a brief description of the Exec functions that control interrupts. See the SDK for details about each call.