An AmigaDOS Shell is a special window on the Workbench screen that accepts text input, allowing you to communicate with AmigaDOS. The Shell is a type of Command Line Interface or CLI. This chapter describes the following:

You can communicate directly with AmigaDOS through a Shell console window, a text-only interface that accepts input entered from the keyboard. The Shell window looks and acts like a Workbench window with some exceptions:

Like Workbench, several independent Shell windows can be open at the same time. While commands entered in one Shell are being executed, you can enter and execute different commands in another Shell window. You can also combine Shell windows into a single window, with each Shell session accessible via tabs. Figure 2-1 illustrates a Shell window opened on the Workbench screen: 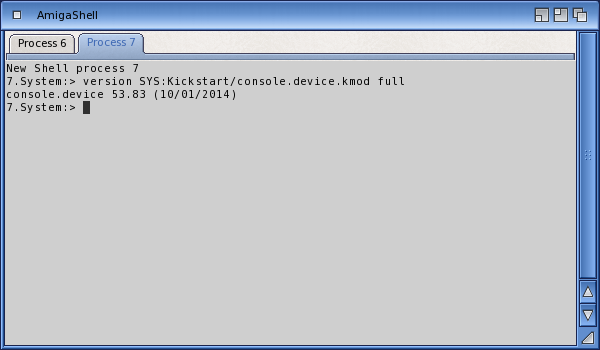 Shell windows can be opened in one of several ways:

When a Shell window is opened:

Like Workbench, only the currently selected Shell can receive input. To enter information in a different Shell, click in its window (or select its tab) to make it the current Shell session.

Use one of the following four ways to close a Shell window:

We recommend closing Shell windows when you are finished with them. Any open window uses memory.

All non-detached programs that run from a Shell must be finished before you can close the window. You can tell that a program is still active if pressing Return does not produce a Shell prompt in the window. Although you can still enter commands into such a window, AmigaDOS does not respond to the commands until the running program is exited.

Enter AmigaDOS commands at the Shell's text prompt. Include with the command any necessary information, such as file names or command options. Press Return at the end of each command line to execute the command. The Shell prompt reappears when the command is finished executing.

To see command output that has scrolled out of the Shell window, use the scroller gadgets to scroll up or down; you can also enlarge the window by selecting the Shell zoom gadget or using the sizing gadget. The Shell window will keep a full scrollback history of as many lines as you specify using the Console prefs tool. Figure 2-2 illustrates a Shell window before and after using the zoom gadget to display the entire output of an INFO command. 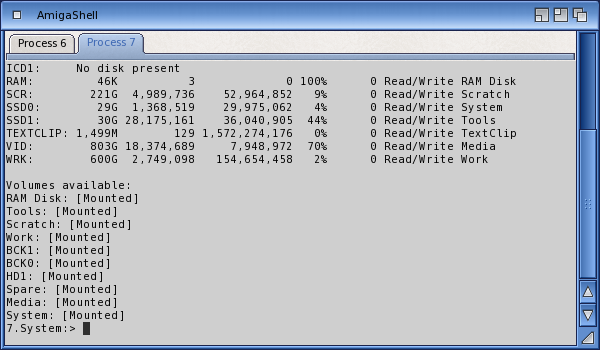 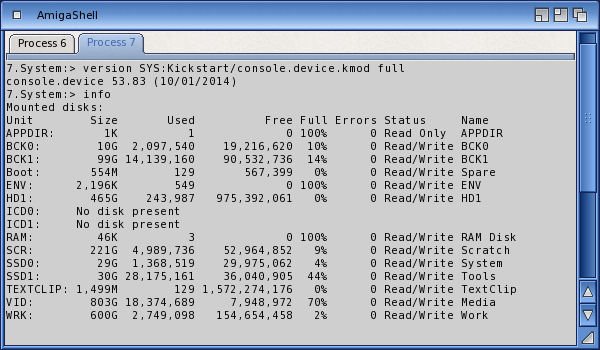 In addition, the Shell supports the following keys and key combinations:

The Shell allows you to enter a command or other information while listing output. However, this stops the output until you press the Return key. The new command executes after the output is finished listing.

If you enter a new command or text and then choose to delete it, the original output resumes scrolling as soon as the last character is erased.

The exact number of lines retained in the command line buffer varies depending on the length of the lines actually stored. When the buffer is full, the oldest lines are removed. You can access lines in the buffer with the up and down arrow keys:

For example, you can copy several .info files from one directory to another by enteringthe full command line with the complete path only once and then recalling the lines as many times as necessary, changing only the file name.

You can also search for the most recent occurrence of a specific command by entering the command line, or the beginning of it, and pressing Shift+up arrow (or Ctrl+R). For example, if you enter DIR and press Shift+up arrow, you are returned to the last command entered to perform a DIR of any directory. Pressing Shift+down arrow goes to the bottom of the command history buffer, leaving the cursor on a blank line.

You can copy and paste information from one console window, such as a Shell or ED window, to the same or another window. This done by selecting commands in the Edit menu, just like in most Amiga tools. Figure 2-4 illustrates copying and pasting from the Shell window to a Notepad window.

Use the mouse to highlight the area of text to be copied and pasted. Highlight the text to be copied by moving the pointer to the beginning of the text area, holding down the selection button, and dragging the mouse pointer to the end of the desired text. Release the selection button and press Right Amiga+C or select Copy from the Edit menu. The highlighted area is copied into the Clipboard and the area is unhighlighted. The text you copied can be repeatedly pasted into any application window that supports reading text from the Clipboard, such as the Shell, Notepad, and MultiEdit.

Working with the Shell

The following are tips for speeding your work with the Shell.

Use command history and command line editing
It sometimes takes several attempts using the same command before getting it right, especially when you are first learning how to use AmigaDOS. Use the arrow keys to recall a previous command and change only the part of the line that causes the problem to eliminate the need to retype the entire line.

Use aliases
Defining short aliases for commands you use often is another time-saver. It also eliminates the need to remember a long and/or complex series of options. For complete instructions, see the ALIAS command in Chapter 6.

Omit unnecessary keywords
For clarity, AmigaDOS command names and keywords throughout this book are often shown although they are optional. When you learn a command's format, however, you seldom need to include optional keywords.

Do not use capital letters
Command names, keywords, and assigned directories are shown in all upper case letters throughout this manual even though AmigaDOS is case-indifferent. This is done to distinguish the keywords from the file names and other information on the example command line. There is no need to use capitalization, except in commands that create a file or directory whose name you want to appear capitalized.

Use implied CD
This allows you to leave out the CD command, saving three keystrokes. Enter the only directory name, path, colon, or slashes at the prompt to change directories. For more information about changing directories, see the CD command in Chapter 6.