A Quick Introduction to IFF

A Quick Introduction to IFF

IFF is the Amiga-standard “Interchange File Format”, designed to work across many machines.

Did you ever have this happen to your picture file?

What about interchanging musical scores, digitized audio, and other data? It seems the only thing that does interchange well is plain ASCII text files.

It’s inexcusable. And yet this is “normal” in MS-DOS.

IFF is also a design idea: programs should use interchange formats for their everyday storage.

File compatibility is easy to achieve if programmers let go of one notion—dumping internal data structures to disk. A program’s internal data structures should really be suited to what the program does and how it works. What’s “best” changes as the program evolves new functions and methods. But a disk format should be suited to storage and interchange.

Once we design internal formats and disk formats for their own separate purposes, the rest is easy. Reading and writing become behind-the-scenes conversions. But two conversions hidden in each program is much better than a pile of conversion programs.

Does this seem strange? It’s what ASCII text programs do! Text editors use line tables, piece tables, gaps, and other structures for fast editing and searching. Text generators and consumers construct and parse files. That’s why the ASCII standard works so well.

Also, every file must be self-sufficient. E.g., a picture file has to include its size and number of bits/pixel.

A chunk is made of a 4-character type identifier, a 32 bit data byte count, and the data bytes. It’s like a Macintosh “resource” with a 32-bit size.

A chunk typically holds a C structure, Pascal record, or an array. For example, an ’ILBM’ picture has a ’BMHD’ bitmap header chunk (a structure) and a ’BODY’ raster body chunk (an array).

To construct an IFF file, just put a file type ID (like ’ILBM’) into a wrapper chunk called a ’FORM’ (Think “FILE”). Inside that wrapper place chunks one after another (with pad bytes as needed). The chunk size always tells you how many more bytes you need to skip over to get to the next chunk. 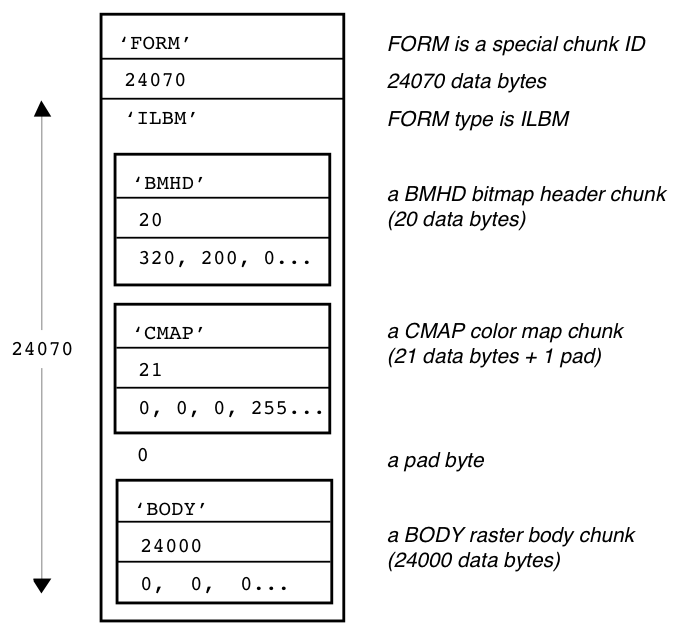 A FORM always contains one 4-character FORM type ID (a file type, in this case ’ILBM’) followed by any number of data chunks. In this example, the FORM type is ’ILBM’, which stands for InterLeaved Bitmap. (ILBM is an IFF standard for bitplane raster pictures.) This example has 3 chunks. Note the pad byte after the odd length chunk.

Within FORMs ILBM, ’BMHD’ identifies a bitmap header chunk, ’CMAP’ a color map, and ’BODY’ a raster body. In general, the chunk IDs in a FORM are local to the FORM type ID. The exceptions are the 4 global chunk IDs ’FORM’, ’LIST’, ’CAT ’, and ’PROP’. (A FORM may contain other FORM chunks. E.g., an animation FORM might contain picture FORMs and sound FORMs.)

How to read an IFF file?

Example code and modules are provided for reading IFF files using iffparse.library. However, if you wish to read a non-complex FORM by hand, the following logic can be used.

Once you have entered the FORM (for example, the FORM ILBM shown above), stored the FORM length (24070 in the ILBM example) and are positioned on the first chunk, you may:

Every IFF file is a ’FORM’, ’LIST’, or ’CAT ’ chunk. You can recognize an IFF file by those first 4 bytes. (’FORM’ is far and away the most common. We’ll get to LIST and CAT below.) If the file contains a FORM, dispatch on the FORM type ID to a chunk-reader loop like the one above.

Advanced Topics: CAT, LIST, and PROP (not all that important)

Sometimes you want to put several “files” into one, such as a picture library. This is what CAT is for. It “concatenates” FORM and LIST chunks. 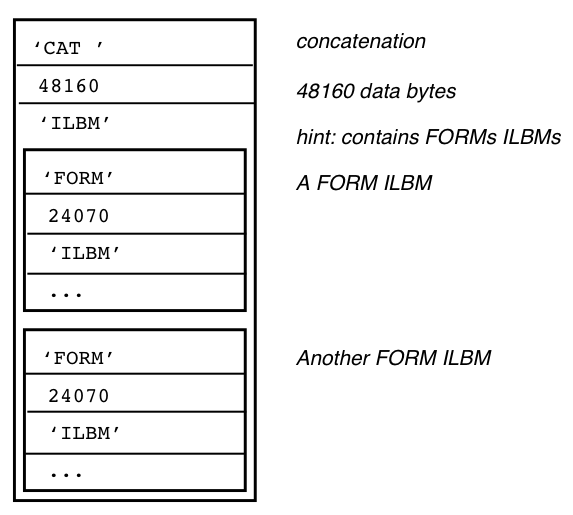 This example CAT holds two ILBMs. It can be shown outline-style:

Sometimes you want to share the same color map across many pictures. LIST and PROP do this:

A LIST holds PROPs and FORMs (and occasionally LISTs and CATs). A PROP ILBM contains default data (in the above example, just one CMAP chunk) for all FORMs ILBM in the LIST. Any FORM may override the PROP-defined default with its own CMAP. All PROPs must appear at the beginning of a LIST. Each FORM type defines as standard (among other things) which of its chunks are “property chunks” (may appear in PROPs) and which are “data chunks” (may not appear in PROPs).